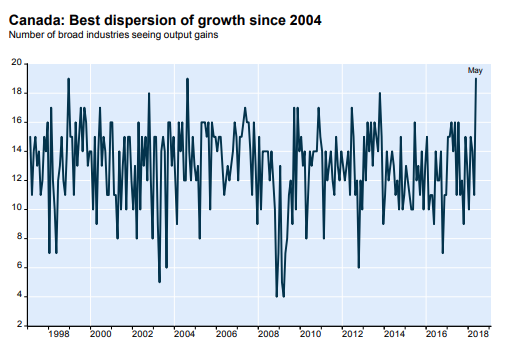 Inflation is the thermometer of economic activity in Canada, which is heating up. Our partners at NBF Economics point out that inflation is rising in Canada led by food prices. These particularly impacts retirees and working families the hardest as they have rising expenses and/or fixed income lags the increases in inflation. May’s 2018 Canadian economic growth measured by Gross Domestic Product (GDP) results were better than expected, with solid headline growth and broad based gains. The dispersion of output gains, meaning the broad participation across the economy was actually the best since 2004 (See chart). The only sector seeing a decline was utilities, although a giveback was always in the cards there after colder-than-normal temperatures had boosted the prior month’s output. 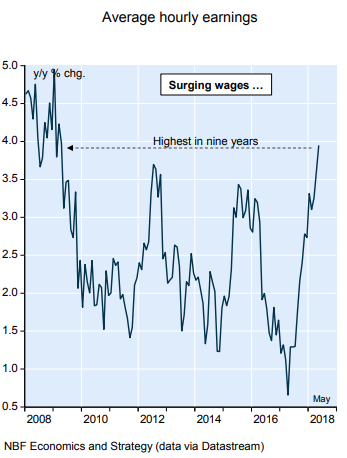 Sometimes disappointing economic news on jobs can be a positive outcome for the inflation watch. Investors seemingly shrugged off the 7,000 Canadian job losses for the May 2018 employment report. This disappointing economic news instead focused headlines away from the decade-low jobless rate of 5.8% and acceleration of wage growth. Indeed, the 3.9% year-on-year increase for average hourly earnings is the highest in nine years. As the chart below indicates, the job market is tightening and with it wage growth since mid 2016 have rose. 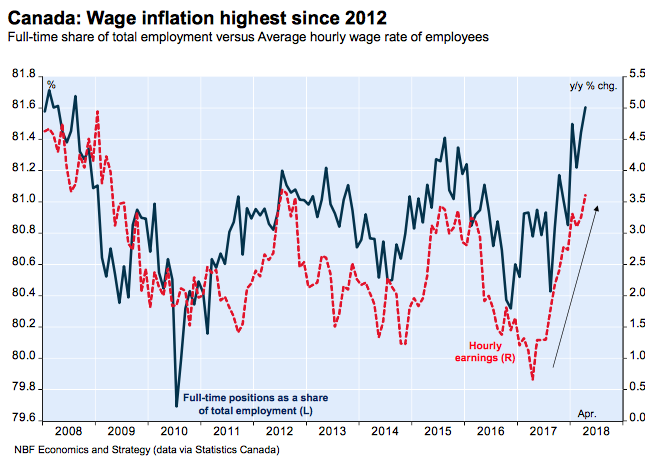 A little inflation measured by the Consumer Price Index (CPI) is not a bad thing. The North American central banks being the Bank of Canada (BoC) and the U.S. Federal Reserve (The Fed) manage monetary policy and set interest rates. Both are targeting to manage inflation. The good news is that the U.S. and Canadian monetary policies are aligned and not competing against each other.

How does the Inflation outlook impact interest rates?

The Canadian April employment numbers that were announced last week saw a “Cooling of employment” literally as a colder-than-usual April may have temporarily hurt hiring in some sectors. But the soft headline number doesn’t necessarily mean Canada’s labour market is struggling. Looking longer-term, the April jobs report does nothing to change our view that the labour market remains tight and will continue to fuel inflation pressures this year. As such National Bank Financial Economics Partners continue to call for a July interest rate hike from the Bank of Canada. 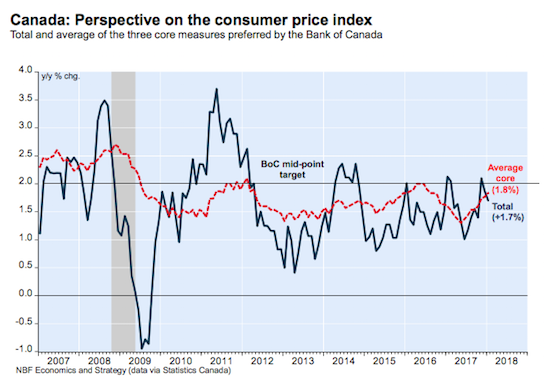 The core inflationary outlook is closing in on the estimates the Bank of Canada (BoC) has projected. While the target rate of 2% annual inflation may sound modest, overall inflation measures are running above the Bank of Canada mid-point target on a 6-month annualized basis (CPI-Trim at 2.3% and CPI-median at 2.2%). We believe this recent trend will persist reflecting a strong economy and labour market.

Sustained low inflation is self-reinforcing. If businesses and individuals are confident that inflation is under long-term control, they do not react as quickly to short-term price pressures by seeking to raise prices and wages. This helps to keep inflation low. Are we in a period of sustained low inflation? It appears as bond market spreads have flattened at the long end of the curve with less than 25 basis points separating 10 years from 30 years maturities a transition is underway. This should alert investors to transitions in the economic cycle.

In Canada, a lot of attention will be on October’s inflation numbers. Given the record low unemployment rate in service-producing industries (hence rising wage pressure), we expect a reversal of the downward trend in service CPI inflation. As a result, headline price could have increased 0.1% m/m (not seasonally adjusted) but, due to the base effect, that may still translate into a small drop in the annual inflation rate to 1.4%. Meanwhile, CPI-common may have gained one tick to 1.6%, in line with recent economic momentum.

While the strength of the Canadian economy is no surprise, with IMF predictions in July 2017 indicating that Canada would be the top performing economy across our G7 trading partners, with growth comes inflation worries.

Inflation in Canada was below expectations in August. That being said, underlying inflation continued to be stronger compared to earlier this year. The Bank of Canada is in a proactive stance to expect more increases in rates.

Enjoy the full report from our partners at National Bank Financial

In light of the converging Canadian and U.S. long weekends due to national birthday parties, we have summarized a strong economic start to the summer below.

Internationally, despite the negative headlines overall growth is solid:

Canadian economic data has largely surprised on the upside this year:

Enjoy the full report from our Partners at National Bank Financial Here.

Canada’s consumer price index (CPI) which measures inflation fell 0.2% in May in seasonally adjusted terms. The year-on-year inflation rate to drop three ticks to 1.3%. This is historically below the target inflation rate of 2% to 3%, yet job or unemployment figures are strong and we look forward to April 2017 GDP results this week at the end of June.

Inflation And Oil: What Is The Link?

Recall that oil prices impact approximately 75% of the Consumer Price Index (CPI). Since the financial crisis, oil prices and inflation expectations have been highly correlated (See chart below). Oil prices declining 20% since the spring suggests the relationship between inflation and oil is intensifying. WTI is West Texas Intermediate and is a standard price measure for western oil. But what is more surprising is that underlying inflation remained weak in May.

Inflation in Canada was below expectations for a fourth month in a row. Dropping gasoline prices restrained the progression of the headline figure and this should continue to be the case in June as excess supply is putting downward pressure on global oil prices. Enjoy the entire report and READ the outlook here.

The Teranet–National Bank National Composite House Price IndexTM climbed 2.2% in May, the largest-ever increase for that month in the 19 years covered by the index. Home prices rose in all of the 11 metropolitan regions covered, a first in 12 months. It is well known that housing price increases are driven by a few markets. Recently, Vancouver has climbed after speculative taxes were implemented as Toronto seems to have cooled off, but the trends remain to be seen. Read a detailed review by our partners at National Bank Financial Economics.

In a recent speech by the Bank of Canada’s Senior Deputy Governor, Carolyn Wilkins, the groundwork was laid for a tightening of monetary policy sooner than markets were anticipating. Wilkins described Q1 growth of 3.7% annualize as “pretty impressive.”  In explaining the performance, she emphasized the contribution of growing business investment. The Deputy Governor was also keen on reminding her audience that Canada’s good showing was “not being driven by just a few key industries”. The signal of a potential increase of 25 basis points in October was apparent in Wilkins comments. Wilkins declared that, under such conditions, the “Governing Council [would] be assessing whether all of the considerable monetary policy stimulus presently in place [was] still required.” Enjoy a full review by our partners at National Bank Economics.

Not only is the headline number impressive, the details of last week’s May jobs report are stunning. Private jobs recovered more than last month’s losses, registering its strongest gain in two years. Canadian employment increased 55,000 in May 2017 according to the Labour Force Survey, well above consensus which was looking for a rise of only 15,000. Among  paid jobs, the private sector posted a massive 59,000 job gain while government showed a decent increase as well as a 9,000 job increase. Enjoy a thorough review of the improving economic data from our partners at National Bank Economics: Read more: https://www.nbc.ca/content/dam/bnc/en/rates-and-analysis/economic-analysis/weekly-economic-watch.pdf

What does this mean for interest rates?

While the Canadian economy is picking up, uncertainty about U.S. policies is weighing on investment plans of Canadian businesses. A rate hike is predicted in Canada and with even greater certainty expected in the later half of 2017 in the U.S. However, slack in the Canadian economy is still translating into “below-target inflation of 2%”, Senior Deputy Governor Wilkins said, and risks to the economic outlook remain. Slack in the economy remains and inflation is below target. The Bank of Canada expects the output gap to close in first half of 2018. Read More from Senior Deputy Governor Wilkins