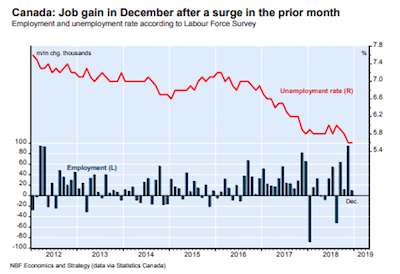 The Jobs Report for December was in-line with expectations.  “This is the worst performance in three years but it’s a pace we should get used to in the context of a tight labour market and a slowing economy,” indicates our partners at NBF Economics. Hiring plans continued to be widespread according to the Bank of Canada’s Business Outlook Survey published late in December. Canadian economic conditions have weakened. The jobless rate remained unchanged at a record low of 5.6% as the participation rate remained unchanged at 65.4%.

What does this mean for your investment portfolios?

This could translate into some cautiousness among employers early in 2019.  Does the more normalized growth and interest rates mean a decline in expected equity returns? December’s 2018 NBF report on business sentiment displays a divergence in expectations. The major decision is your belief about recent economic news. Do you view December’s volatility 2018 as the beginning of a slow period? If so markets may be fairly valued. If you believe with the lowered P/Es (price earnings ratio) equities are a buy within the extended late Bull market, then you will look to buy quality and have specific price targets. Regardless, it is a time in our economic and market cycles where active management and advice is required. Contact our seasoned Investment Advisors for a fulsome discussion on next steps for your portfolio. 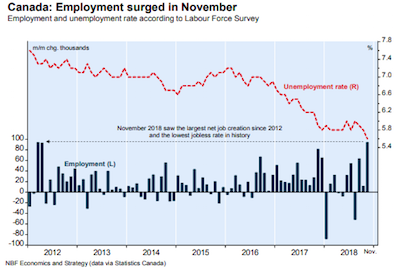 Canada seems to be experiencing a “Santa Claus” rally in its most recent, very positive jobs report. Our partners at National Bank Financial offer a very merry review of the November jobs report. All expectations were meet or exceeded with job gains in the private sector (+79K), but also in government (+8K) and for self-employeds (+7K).

Does the solid November jobs report guarantee a January 2018 rate hike by the Bank of Canada?

Not necessarily. Our partners at NBF offer this outlook: “If recent history is any guide the oil price plunge will, with a lag, hit employment in Alberta, which so far this year has seen the fastest employment growth among large provinces (right chart). In other words, unless oil prices pick up significantly, one can expect a moderation in overall Canadian employment growth in 2019.” 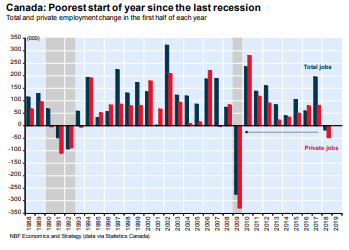 Although the Canadian (and U.S.) job and employment numbers announced on Friday July 6th were positive, the trends in each country are contrasting. The Canadian job numbers have not done well in comparison to strong U.S. employment. These differences will create contrasts in our interest rate and economic policies. As our partners at National Bank Financial Economics (NBFE)  team states, “Total employment registered its worst start of the year in the current expansion due to the 48K drop in private-sector jobs. Major cities were not immune to the slump. Vancouver is down 45K jobs this year and Toronto has seen a pullback of 24K.”

What to look for in this week’s Bank of Canada meeting?

In Canada, the highlight of the week will be the central bank’s report. “With its three core inflation measures close to two percent, it could be said that the Bank has a green light to proceed with further policy normalization. However, the deterioration of the international trade outlook since the central bank’s last meeting ought to give pause to the BoC.” What direction will interest rates take in Canada?

NBFE surmises that “with the U.S. threatening to instigate a trade war with China, and with NAFTA negotiations stalling, we don’t see conditions as supportive of further monetary policy normalization.”

For a detailed report on this week’s economic outlook here. 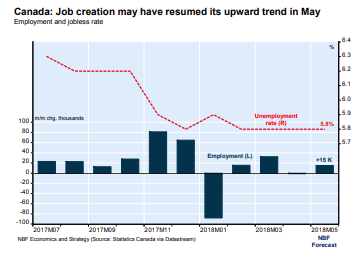 Big buzz around U.S. job statistics as Canada’s Bank Rate stayed the same for the first week in June 2018. The establishment survey showed rising at 233,000 jobs in May. The private sector added 218,000 jobs in the month, buoyed by cyclical sectors like construction and manufacturing.

The outlook for Canada’s job rate also looks positive according to our partners at NBF.

Not only is the headline number impressive, the details of last week’s May jobs report are stunning. Private jobs recovered more than last month’s losses, registering its strongest gain in two years. Canadian employment increased 55,000 in May 2017 according to the Labour Force Survey, well above consensus which was looking for a rise of only 15,000. Among  paid jobs, the private sector posted a massive 59,000 job gain while government showed a decent increase as well as a 9,000 job increase. Enjoy a thorough review of the improving economic data from our partners at National Bank Economics: Read more: https://www.nbc.ca/content/dam/bnc/en/rates-and-analysis/economic-analysis/weekly-economic-watch.pdf

What does this mean for interest rates?

While the Canadian economy is picking up, uncertainty about U.S. policies is weighing on investment plans of Canadian businesses. A rate hike is predicted in Canada and with even greater certainty expected in the later half of 2017 in the U.S. However, slack in the Canadian economy is still translating into “below-target inflation of 2%”, Senior Deputy Governor Wilkins said, and risks to the economic outlook remain. Slack in the economy remains and inflation is below target. The Bank of Canada expects the output gap to close in first half of 2018. Read More from Senior Deputy Governor Wilkins