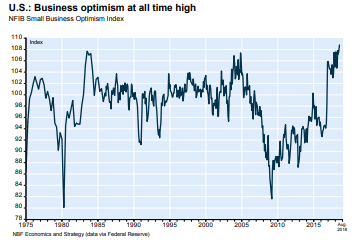 After months of negotiations and looming tariffs, Canada finally agreed to a revamped trade deal with the U.S. and Mexico. The “United States-Mexico-Canada Agreement” (USMCA for short) will replace NAFTA. Financial markets were indifferent to the new NAFTA, as Canada averted deepened trade wars and was able to protect the essential auto industry from steel and aluminum trade impacts “NBF Economics Canadian GDP growth forecast for 2019, which had assumed a deal would be reached, is unchanged at 1.9%. But with this earlier than-expected agreement, we’ve brought forward the timing for C$ appreciation, now expecting USD:CAD to reach 1.25 by the first quarter of next year. While the trade deal is good news, that’s not to say the job of the Canadian government is done. There are competitiveness issues to tackle.”

Our partners at NBF Economics offer a remarkably detailed view of current economic conditions in the U.S., Canada and the Emerging Markets. Much of the outlook remains positive, lead by the “hot” U.S. economy. 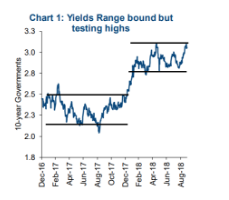 A sixth consecutive quarter of above-2% real GDP growth is in the cards for the U.S. economy. Consumption spending remained strong in Q3 buoyed by a healthy labour market and personal income tax cuts. Understandably U.S. Business remains optimistic while Bond Markets anticipate a rise in rates to combat inflation expectations. 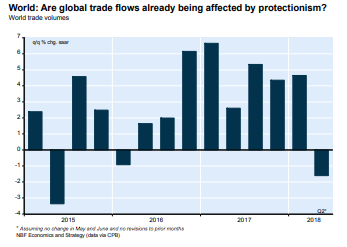 Rising protectionism with emerging trade wars and tariffs are moving from the rhetorical to the possible over the summer. Concerns over protectionism have cast a financial funk over global markets despite record earnings in many cases. Downside risks to the Canadian economy have arguably increased amidst an apparent deterioration in the trade relationship with the U.S., the latter not only imposing tariffs on steel and aluminium imports but also threatening to slap additional ones on the crucial auto sector.

Our partners at National Bank Financial has outlined their revised expectations below, with a detailed

Enjoy the detailed discussion from our partners at National Bank Financial Economics HERE. 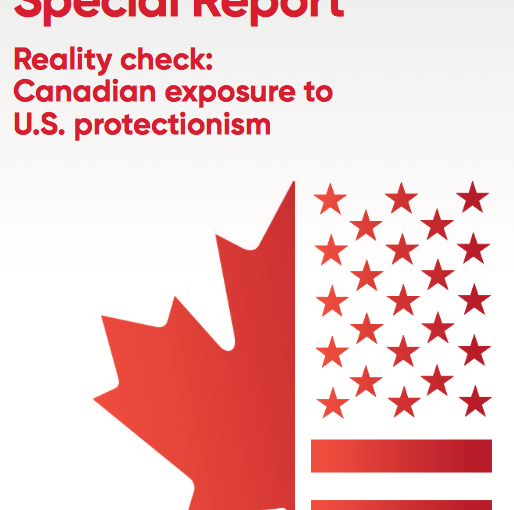 Global financial markets are attempting to determine the probability and the implications of the rhetoric and status of negotiations of various trade agreements. Most recently the implications of a trade war with tariffs has contributed to a 4% decline in valuations. At this point, while the protectionist probabilities increase the reality of increased costs globally is already being forecasted as the U.S. stock markets have experience some of their largest daily point drops in its history. Regardless of the outcome, increased volatility is assured. Our partners at the National Bank Financial (NBF) Economics offer a detailed exploration of the increased world protectionism for Canadian industries.

Enjoy the special report from our partners at National Bank Financial on Canadian exposure to U.S. protectionism: Click here.